I received November’s Sweet Reads Box free of charge to review. All opinions are my own.

If you follow me here or on social media, you know that the Sweet Reads Box is only one of my favourite subscription boxes ever (and I’ve tried quite a few). It’s a Canadian subscription service for book lovers that includes a new novel and some treats connected to the story. November’s box came just before my road trip with Cathy to see Cityline so I’m a bit delayed in showing you what’s inside but I’ve got the full reveal for you today so let’s get to it.

Each box comes with a guide to its contents, this one with a quote from Charles de Gaulle: “It is not tolerable, it is not possible, that from so much death, so much sacrifice and ruin, so much heroism, a greater and better humanity shall not emerge.”

Now I’ve heard of The Nightingale, but I’ve never read it. “For November we wanted a novel centered on the theme of Remembrance so we looked for a novel set in WWI or WWII,” say Sweet Reads Box owners Kerrie and Mark. “The Nightingale stood out as it told the story of women and their role in France fighting in the resistance and housing enemy soldiers in their homes. The stories of Vianne and Isabelle show two different perspectives and ones we hadn’t read before. The courage and bravery show by so many in France and the portrait of the horrors of war for French citizens made this our choice for November.”

Here’s the description on the back of the book:

“With courage, grace and powerful insight, bestselling author Kristin Hannah captures the epic panorama of World War II and illuminates an intimate part of history seldom seen: the women’s war. The Nightingale tells the stories of two sisters, separated by years and experience, by ideals, passion, and circumstance, each embarking on her own dangerous path toward survival, love, and freedom in German-occupied, war-torn France — a heartbreakingly beautiful novel that celebrates the resilience of the human spirit and the durability of women. It is a novel for everyone, a novel for a lifetime.”

I don’t know about you, but I’m sold! Sounds like an amazing book to curl up with on a winter’s night.

Next, the Bicicletta Pouch from Danica Studio.

“The old-fashioned bicycle featured on the pouch reminded us of the stolen bicycle Vianne used to deliver messages and papers,” says Kerrie and Mark.

My daughter’s already claimed it so no pouch for me. But it’s cute!

“Tinned sweets were easy to send to soldiers and Simpkins was a favourite in Britain since 1921,” say Kerrie and Mark. “We chose this flavour as it was perfectly suited for the airmen Vianne spent so much of her time rescuing.

The tin’s a big larger than something I’d want to carry around in my purse (funny, I don’t have a problem with my giant phone) but it’d be great to have in the car on a road trip. These ones are the Retro Forest Fruit with Guarana.

“What better way to thank the allied soldiers for their service than with this thank you … With its Cinnamon Spice flavour it’s perfect to enjoy on a cold November day/night.”

My hubby’s a big fan of cinnamon and chai and all of those warm, spicy flavours so I’ve put this Merci Tea tea gram aside for him.

Now this is nice and smells great — it’s the Sparkling Champagne Cleansing Bar from Perth Soap Co. I’m keeping this one for me.

“When the war ended, champagne flowed freely as the Allies celebrated their victory. While we can’t send you champagne, we can send this amazing soap created in Perth, Ontario that will have you smelling better than a French cafe.” 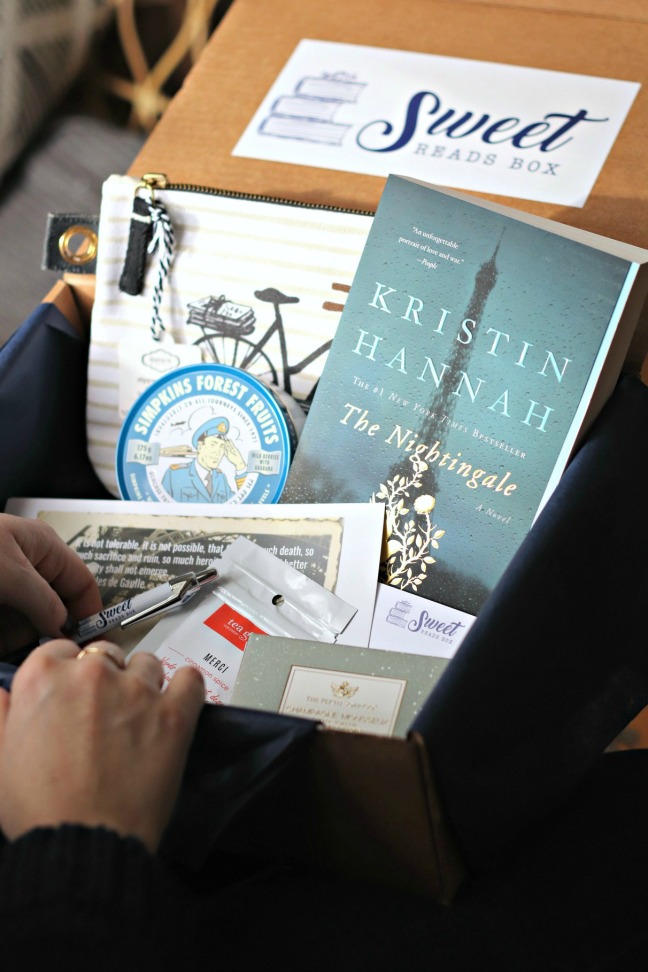 Not only do I love Kerrie and Mark’s taste in books, I also love that all of the extra treats are things that can be used (if not by me, than by friends or family.) You can tell they put a lot of time and effort into choosing things that go so perfectly with the theme of the novel, and for that I think it makes the box well worth the price and an excellent gift.

The Sweet Reads Box sells for $49.99 + $12 shipping (currently shipping in Canada) and signing up for the Sweet Reads Box newsletter will get you a 10% discount on 3- and 6-month subscriptions. November and December’s boxes quickly sold out so if you want to order the January one, go go to the site! (And if you’d like to see previous boxes, check out my posts for September and October.)

Do you know someone who’d love The Sweet Reads box? Do tell! Have your read The Nightingale? What did you think? What would you like to see in a future box? You know I love hearing from you. Let’s chat!

Happy new year! Are you doing okay? I thought I'd post loads over the holidays and tried several times but came up empty. Just really needed the break. I hope you were able to get one too. Today I got back at it and blogged all about the Hygge Holiday Box from @hygge.inabox (link in profile), which included this wonderful cookbook by @mountainmamacooks, Après All Day: 65 Cozy Recipes to Share with Family & Friends. The box is sold out but it'll give you an idea of the kinds of things you'll find in the next limited edition, February's International Hygge Day Box, as well as the seasonal boxes.
Picked up a couple last things today before hunkering down for the holidays and who knows how long after. Cupcakes by @thimblecakes. (Best in town! 🏆 😋) Who makes the best ones where you are? 🧁
Santa's on his way! (He's still coming, right? 😬)
Maybe just a little nibble. 🤫 What's a holiday treat you can't stay out of?
Great gift idea! 🚨@unwrapped_experience is a Canadian lifestyle box featuring artisans in and around Coburg, Ontario that’s available by subscription or single box and ships across Canada and the US. The monthly boxes are curated and the contents a surprise and there are all kinds of wonderful items you can add on plus fully customizable boxes as well. Lots of options with this one! November’s box is my first and so festive!
Photo dump #fbf
Treats for the reindeer 🦌🦌 #tbt
November’s @glossybox_us introduced me to some truly delightful beauty products I’ll be looking to buy again like @commodity's sunny Paper fragrance and The Body Crop's colour-changing Oui Cherie lip oil. Glossybox is $21 USD/month and this one is valued at $142. 😮
Today on the blog: waxing poetic on artisanal candle subscription service @Vellabox, flame-ous for its 100% soy or coconut wax candles made with top-of-the-line fragrance oils and lead-free cotton wicks. November’s box is my third and it’s quickly become one I look forward to the most. It’s like a little box of cozy, beautifully put together and a great price too.
#tbt that time we sent paper invites for my tween's Christmas party. Who else enjoys a touch of fancy? 🙋‍♀️ We ordered from @vistaprint and they shipped in four or five days. I don't remember them being expensive, maybe $1.50 each for 20? The hardest part was picking a design -- so many great options! #notsponsored